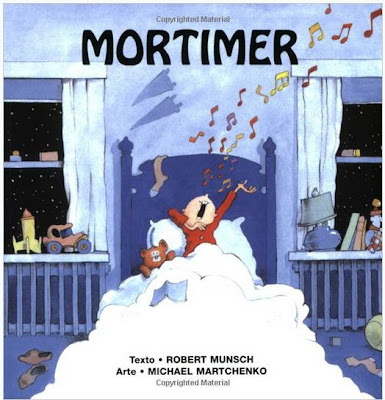 My Granddaughters love this story so much that I am asked to read this story over and over - sometimes twice on one night.


We loved Murmel, Murmel Murmel by Robert Munsch so much that we decided to read more of his books starting with this one.

The cover makes me laugh because I imagine my Granddaughter's face as she sings-shouts with Mortimer. She is too cute for words.

In my opinion this story starts off a little strange. Mortimer's mother opened the door to his room and throws him into bed and says, "MORTIMER BE QUIET."

How rude! Mortimer looks so small in his big fluffed up bed. What kind of mother is she?

But as soon as the mother gets downstairs, Mortimer (and my Granddaughter) sing at the top of their lungs,

Just look at Mortimer on the book cover singing his heart out just as my little angels sing.

Well Mortimer makes so much noise that his father goes into Mortimer's room and yells, "MORTIMER BE QUIET."

Mortimer is compliant and shakes his head, yes. But as soon as father gets downstairs Mortimer sings his song again. And once again my little Hunny Bunny sings too.

Mortimer's seventeen brothers and sisters tell Mortimer to be quiet.  Then the police do the same. But every time he is left alone in his room, Mortimer sings his song at the top of his lungs.

No one knew what to do about Mortimer. Everyone starts to fight with each other. It's their turn to make a lot of noise.

In the meantime, Upstairs, Mortimer got so tired waiting for someone to come up that he fell asleep.