You know, I don't remember how this book ended up in our collection but we are glad it did. We have enjoyed this book many times and I am sure we will enjoy it many more times.

The story begins with Lucy sitting by the pond, a big grin on her face staring down at some very silly looking frogs which are are all looking back up at her.

Lucy loved frogs. She loved penguins, anteaters and hippos too, but frogs were special. Besides, she could find them in the pond behind her  house. Hippos were much harder to come by.


Lucy and her little sister, Lenore like to collect frogs and bring them home to play with then send back to the pond.

Sometimes the frogs are allowed to have a sleepover because they have that kind of Mom.  On one such night, Lucy decides to give a frog a kiss goodnight on top of his head. Magically, the frog turns into a prince. Mom calls everyone she knows plus the police and the fire department.

Soon all the towns people are picking up frogs from the pond and kissing them.  Lucy and her sister take a few frogs home for safe keeping but soon the town is overrun with princes. Lucy notices the princes acting like frogs and gathering back at the pond. She realizes the princes want to be frogs again but how is that going to happen?

Lucy gets an ideal. Lucy and her little sister go home and get the frogs which they kept for safe keeping. One of the princes, kisses a frog on top of the head and he magically turns back into a frog. Before long, all the princes pick up a frog to kiss and the pond is full of frogs once again.

Lucy did find a hippo a few years later, which her Mom after a lot of begging, let her keep for a few weeks . . .
. . . but she never, ever kissed him.

I don't know about you but I have always had trouble getting my daughters to release the little critters that they have captured. They always wanted to keep it as pet whether it was a butterfly, a june bug or a frog. My granddaughters like to collect little critters too but they are easily convinced to release them so they can go back to their homes, back to their families. I wonder if this book has anything to do with that?

ABOUT THE ILLUSTRATIONS AND WRITING

Michael Martchenko's vibrant, action filled illustrations are just as visually silly as the story itself.

Born: Toronto, Ontario, 1958.
Married. Three children.
As a child Andrea lived n Mexico, where she learned to speak Spanish and eat raw chili peppers. She went to an arts high school in Toronto, Thornton Hall, received a B.A. in psychology from Queen’s University, and cartooned for the Whig Standard in Kingston. After marrying Rainer von Königslöw in 1978, she moved to Montreal where she taught art to children at the Centre d’Education par la Musique et les Artes. She has always written and painted and has had exhibits in Montreal and Toronto. When she was pregnant for the first time she found her new figure so comical that she began to draw herself and started a line of greeting cards that sold all across Canada at Shirley K. Maternity stores. Andrea has three children, two girls and a boy who are her pride and joy – Alexis, Tai, and Keir. She also has three cats – Grizabella, Whoopi Goldberg, and Nebbish. 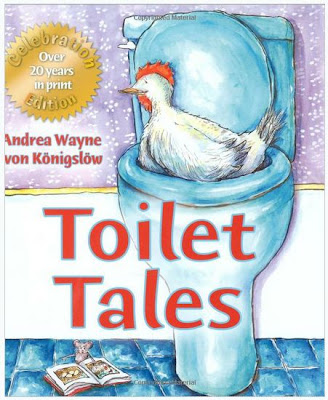 This is toilet humor in the most literal sense--a lighthearted, encouraging book that takes the anxiety out of the business of toilet training.
Product Description
Silly animals, toilets are for kids! 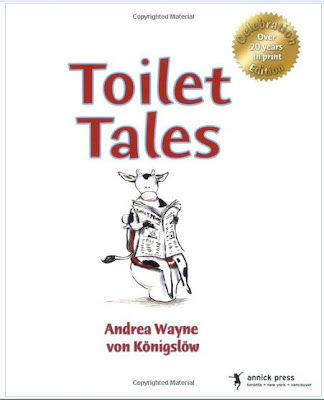 With its lively cast of critters and gentle humor, Toilet Tales has been helping youngsters feel at ease in the bathroom for more than 20 years. Now this giggle-inducing favorite returns with vibrant new watercolor illustrations and a few new creatures, too. 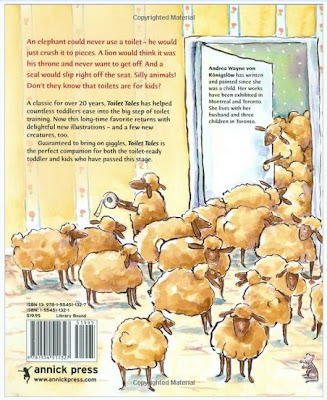 Page by page, young readers will delight at the antics of animals on the commode. Of course, a giraffe could never even fit through the bathroom door. A seal would slip right off the seat. And a sitting elephant would simply crush the potty to pieces. After many such comical bestial blunders, the story concludes that animals can never use toilets because toilets are meant for "big kids like you."

Featuring more than a dozen animals -- including kangaroos, an octopus, and even an orca whale and written with child-friendly wit, Toilet Tales is guaranteed fun for any toilet-ready toddler.
http://www.amazon.ca/Toilet-Tales-Andrea-Wayne-Konigslow/dp/1554511321

To learn more about Michael Marchenko go to his site:
http://biography.jrank.org/pages/947/Martchenko-Michael-1942.html