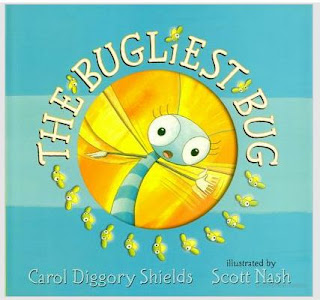 
I was looking through a pile of books trying to find something new to read to by granddaughters when I came across this cute little bug story.

The girls loved The Roly Poly Spider by Jill Sardegna and this book has a similar rhythm.

I did a quick flip through the book and found a myriad of bugs rendered in lively colours.

The first page roped me in and makes the girls giggle.

My granddaughters are  intrigued by bugs; moving rocks to see the potatoe bugs scramble; plucking critters off the plants in the garden, so I knew this book would be right up their alley.

Scott Nash's cartoon illustrations of bugs: caterpillars, flies, mosquitoes, lady bugs, bees, dragon flies and stink bugs are fun to look at and to talk about. (The mosquito's belly is big and red as it must have had a nice drink of blood recently.)

Sometimes it is difficult to finish reading this book because the girls are so busy pointing at the bugs and talking about them.

All of the insects are making their way to the Bugliest Bug Contest.

They are so busy performing for the judges that they do not notice that the judges have wings tied to their backs with gossamer strings.

But young Damselfly Dilly has spied the strings. She gets a closer look and realizes that these are impostors.

She tells all the bugs that the judges are arachnids in disguise. They have planned this contest to trap a tasty treat.

Dilly instructs the insects to do what each insect does best. The army ants march, the mantises pray, but in the end it's the stink bugs that force the spiders to flee.

It is a happy ending for everyone but especially for Dilly. She thought she didn't have a chance to win the contest because she was not clever or frilly but her heroic actions awarded her the title of the bugliest bug!

"How odd," Dilly thought.
"Those judges have wings
That are tied to their backs
with gossamer strings." 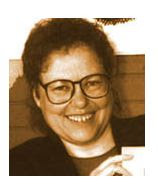 Carol Diggory Shields was inspired to write SATURDAY NIGHT AT THE DINOSAUR STOMP after "being called a Nagosaurus by my five-year-old," she admits. "I started playing with the idea of partying dinosaurs who were scientifically accurate (more or less), and somehow in the prehistoric ooze of my brain, SATURDAY NIGHT AT THE DINOSAUR STOMP took shape."

Her rocking prehistoric party proved a hit with both young readers and critics. "Witty and imaginative, the poem has a rhythm that makes cumbersome multisyllable dinosaur names roll off the tongue," said KIRKUS REVIEWS.

Currently a children's librarian, Carol Diggory Shields has also worked with children as a recreational therapist and at one time was a designer of stuffed toys. Her years of being around children have no doubt helped her get a feel for the fun-but-factual stories that kids love, told in animated verse with an infectious beat. After successfully collaborating with illustrator Scott Nash on SATURDAY NIGHT AT THE DINOSAUR STOMP, she teamed up with him for MARTIAN ROCK, "the true story of how a meteorite from Mars arrived on Earth," she quips.

More recently, the pair worked together again on THE BUGLIEST BUG, a wacky tale of an insect talent contest threatened by hungry spiders (disguised as judges) and a brave little Damselfy who saves the day.

"Insects are awesome!," the author enthuses. "Every human invention, from catapults to jet propulsion, had already been invented and used by bugs for millions of years. And that's why to be 'bugly' is the ultimate compliment."

SATURDAY NIGHT AT THE DINOSAUR STOMP 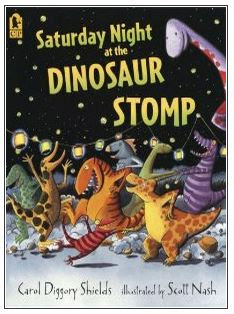 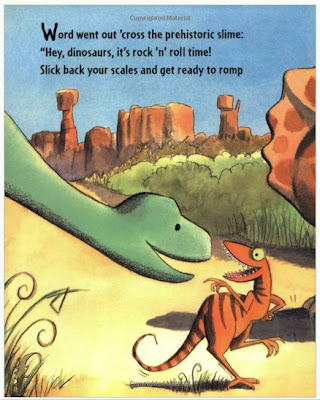 What did the dinosaurs do for fun?


What really happened when the Jurassic gang wanted to let off some steam?

They danced, of course. They rocked and rolled; they twirled and tromped They had themselves a Dinosaur Stomp

With illustrations by Scott Nash that leap off the page like a raptor doing the fandango, Carol Diggory Shields tells dinosaur devotees all about reptilian revelry with a foot-tapping, tail-whacking beat. 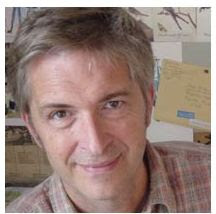 Author and illustrator of TUFF FLUFF: The Case of Duckie's Missing Brain, Nash is the illustrator of more than 30 children's books, including the Flat Stanley series by Jeff Brown, Saturday Night at the Dinosaur Stomp and The Bugliest Bug by Carol Diggory Shields.

If you would like to know more about Scott Nash check out his site.
http://scottnash.com/ 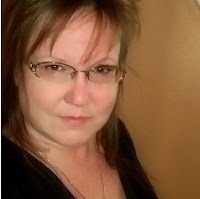 I love to read your opinions and comments. It makes my day.

My apologies, all anonymous comments are deleted due to an excessive amount of spam.

Wishing you the best, Darlene

Posted by Darlene Nemeth at 7:51 PM